The majority of U.S. citizens do not support the current predator-in-chief.* He does not speak for us or represent our views.  We condemn his racist and xenophobic actions, most recently the executive order he signed yesterday that temporarily bans citizens – including refugees –  of Iraq, Libya, Somalia, Sudan, Syria, Yemen and Iran from entering the United States.

In the past seven years, I have had the privilege of working with a growing number of English-language learners from Yemen.  Their families are not terrorists.  My current students – aged five to ten – trade Pokémon cards and read Diary of a Wimpy Kid.  They play soccer and make drawings of purple horses and flowers.  They cry when they fall on the ice and bleed.  Last year, one student broke my heart when she regularly interrupted me to tell me that her cousins in Yemen had no food and were starving.  And in November, a truly perplexed fourth grader asked me, “Why does Trump think we are terrorists?”

While the horrors in Syria have been widely reported, mainstream media barely makes a peep about the bloodshed in Yemen.  According to UNICEF, one child dies every 10 minutes in Yemen.  Children there are severely malnourished and lack access to clean water, food and medical care.  This is due – in large part – to a civil war that has been raging in Yemen since 2015.  Not surprisingly, the United States is involved in the conflict as an arms supplier to the Saudi Arabia-led coalition which, through its attacks on Houthi rebels, has indiscriminately murdered thousands of Yemeni civilians, including children. 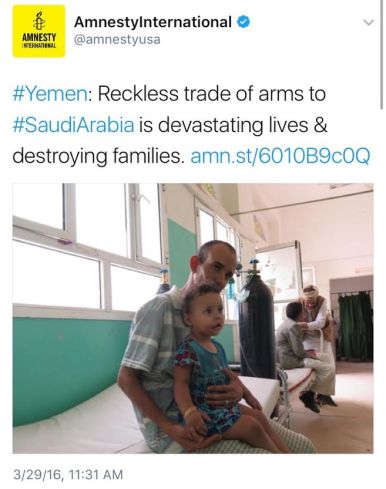 Zaid Jilani, in his January 25, 2017 article in The Intercept, said Trump’s Muslim immigration executive order is “…like a twisted version of the you-break-it-you-buy-it Pottery Barn rule: If we bomb a country or help destabilize its society, we will then ban its citizens from being able to seek refuge in the United States.”

Next week, my Yemeni students may want to discuss this weekend’s events with me.  They may wonder why Saudi Arabia is not included in Trump’s Muslim ban.  Or they may just want to tell me about Pokèmon trainers.  Whatever awaits me, I will continue to rage inside. My newcomer kindergartener will reach for my hand, as she always does, and I will think about how lucky she is to have arrived here before 2017.  I will continue to wonder about the safety and well-being of her relatives in Yemen.  Through gestures and individual words, she will tell me the names of the shapes she’s learned and will ask to borrow one of my books.  The humanity I experience in my school on a daily basis is comforting, and, I believe, reflects the decency and compassion of most U.S. citizens.  Trump’s actions and rhetoric, on the other hand, are vile and inhumane.  He must be stopped, for as we are witnessing, he is an impediment to our ability to become a more tolerant, democratic and caring society.  Trump appears to want the opposite and will lie to get it.  I vow to protect all of my English-language learners as best I can, and will use this space to voice my opposition to the Trump agenda and to continue to tell the truth about what is happening in New York City public schools.

*I am crediting Winona LaDuke for this term