In its third annual 30 Under 30 special report (1/20/14), which celebrates the professional achievements of a diverse group of 20-something game changers, Forbes Magazine refers to the young, ambitious entrepreneurs in the education field as “stars.” This is a misnomer. They are not education stars for not a single one is a working classroom teacher.  As a business publication, Forbes should have instead referred to them as stars of corporate education reform.  28-year-old Dan Berkowitz, of Youth Orchestra LA, may be the only exception.

Here’s some telling data that I extracted from the information presented in the report. 15 attended Ivy League universities (five Harvard grads are among the bunch), two went to Stanford and one is employed by MIT. Of those boasting classroom teaching experience, five are Teach for America alumni. If I were to conduct extensive research on each organization on the list, I’m sure these numbers would be significantly higher.  To me, 30 Under 30 smacks of privilege and self-righteousness and lacks empathy.  Unlike working educators, who are the real experts, the men and women on the list do not spend 40+ hours a week in a school building teaching diverse learners. These “stars” lack the experience and knowledge needed in order to fully grasp the complexities of public education today. Thus, how viable are their products?

Forbes refers these entrepreneurs as “prodigies reinventing the world right now.” But is it for the better? And whose world are they reinventing anyway? Who is truly benefiting from their innovations? Are their offerings going to give our kids what they really need in order to become healthy adults? As a teacher in a Title I elementary school in Brooklyn, many of these so-called solutions seem gimmicky – “easy” fixes – and fail to get to the heart of the fundamental problems in our society that are negatively impacting social/emotional and cognitive learning: namely poverty and inequity.

27-year-old Caryn Voskuil of Rocketship Education, a controversial charter school network, is among those listed.  Forbes writes that “she began her career as an English teacher in Washington, D.C. public schools, but swiftly became a trainer of teachers.” So with just two or so years of teaching experience, she is deemed expert enough to train teachers? Forbes continues by saying, “She is charged with managing all digital curriculum and instructional technology that appears on more than 5,000 student screens, including replacing old hardware with over 3,500 Chromebooks.” Ok, that makes sense now.  She’s not instructing teachers on how to teach; rather, she’s training them to use computers to teach students.  In my opinion, Ms. Voskuil is missing out on the best part of teaching, which is forming relationships with students.  At my school, located in a low-income neighborhood of Brooklyn, some kids could care less about online instruction. Instead, they crave meaningful interactions with caring adults.  They want to be heard, and they benefit from connections made with both their peers and with the adults in the building. Excessive online learning is isolating and interferes with community-building. Darcy Bedortha describes this disengagement in her recent exposé on K12 Inc., a corporation that operates online schools.

In terms of instruction, can the new educational sites profiled in 30 Under 30 – Khan Academy, InstaEDU, mSchool and Udemy, for example – glean what motivates and inspires a struggling and/or reluctant student? Do they know that M, who “failed” both the math and ELA 2013 Common Core state tests, offers insightful commentary during class discussions on topics related to social inequality? It was M’s teacher, not an online program, who thought to assign him a research project on homelessness.  Today M is an expert on the Coalition for the Homeless and even persuaded my school’s Penny Harvest committee to donate money to the charity.  And when M, who is restless and impulsive, becomes disruptive in class, does the computer think to send him to a lower grade to tutor newcomer Spanish-speaking ELLs (English-language learners)? Experiencing these kinds of real life – not virtual – successes can be empowering for angry students with low self-esteem.  Recently a 40-year veteran teacher who subs at my school shared with me a new strategy he came up with to get M, who hates math, to do his work. His technique may or may not work again with the capricious M.  As every teacher knows, some days are better than others (today was exasperating with M), and what works for one child may not be appropriate for another.  Even with decades of teaching experience under his belt, Mr. D acknowledges that everyday is a learning experience and that he doesn’t have it all figured out.

What I’ve described here are just a few examples of authentic personalized instruction that address the needs of the whole child, not just a student’s “academic deficits” that ed reformers argue hinder “college and career readiness.”  Software programs do not offer social and emotional intervention strategies that teachers develop through experience and intuition. Learning is a process that ebbs and flows.  Some moments are ugly; others poignant.

I wonder how M would do with ClassDojo’s software, which tracks student behavior and boasts “45%-90% increases in positive behavior and 50-85% decreases in negative behavior”? The company was founded by Sam Chaudhary and Liam Don, both 27.  How do they define negative behavior? Do they, or their software, know what drives students to misbehave?  Jeff Bryant recently described disturbing discipline practices in charter schools in this Salon article.  Are these charters among ClassDojo’s clients?  I haven’t seen the product, but like the Common Core package of scripted curricula, standards and testing, I am skeptical.  I’m picturing a one-size-fits-all, prescribed solution that fails to take into consideration human vagaries.  Students are sentient beings, not outputs.

According to this CB Insights graphic, which appears in Forbes’ special report, in a single year, 2012 – 2013, ed tech startups received $1.1 billion in funding. 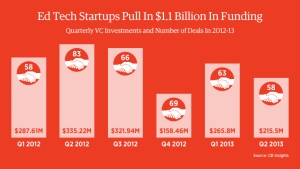 If Forbes’ article listed the real stars of education, working educators, the ideas put forth would be far different.  Imagine if that money had been used towards lowering class sizes or to hire educated adults to work with individual or small groups of students in a classroom? Both M’s teacher and I agree that M would benefit from a one-to-one paraprofessional. What if that money paid for much needed social services and counseling that students like M are not getting?  What if that money funded inspiring social emotional curricula that schools either don’t have the money for or reject because they are seen as not preparing kids for the state tests?  With $1 billion, I would make sure that every teacher had a working printer and extra toner cartridges. I would also ensure a robust supply of SmartBoard bulbs, which cost around $200 each.  Every school would have multiple copy machines that work. Teachers would be given the freedom to choose their own books and supplies, and quality after-school enrichment programs – not test prep – would be available to all students. I would also invest more money in healthy school lunch programs.

Teachers aren’t miracle workers; neither are virtual academies.  Yes, teachers make a difference in the lives of children, but some things – like home life factors – are beyond our control.   Until we properly address the socioeconomic factors that affect learning, the problems facing our public schools will continue.